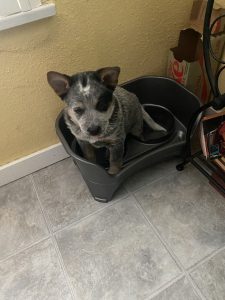 I have a new puppy and he is wonderful. His name is Gucci.

He is a Ivenlee puppy from Lebanon Oregon. He is 3 months old and 12 pounds. He is bright, spunky and very fast.in other words he is a lot of dog and going to be hell on wheels a round the agility course. I am so excited to be training again. I am hoping to use him as a service dog but time will tell if he with alert or not.

RATs USDAA show Oct 29-30th was a great success. Judge Rebecca Hill from Maryland had fun, challenging, yet awesomely nested courses once again. She judged our April 2021 show also. And she brought some extra prizes for lowest snooker score and fastest Steeplechase. Rebecca also brought these funny, awkward skeletons for us to use as our batons for the Pair Relay. They ended up in pieces by the end of the class – it was hilarious!
The costume contest was a hoot with several people going all out. Hana Brickman with her 3 jailbreak dogs won and Erin Urquhart & OCD as the UPS guys took 2nd. And Congrats to Sydney Ryan and Ego on their ADCH!
The show committee operated like a well oiled machine once again – you all are such professionals and very appreciated! Micki Lagrou chair, Jill Elizabeth Seward show secretary, Cheryl Parker scorekeeping and costume contest organizer, Christie Woolsey and Barb Eisenstein agility gate and network set up, Marcia Lyons timers, Jeff Winkle chief ring steward, Kris MacKay awards, Dan Salinas and Erin Urquhart course building, Annette Kuhls the amazingly fun judge’s gift (she was so excited about it but especially loved the hats!), and Pam Diemond and Wade for helping pack and haul the trailer.

Our USDAA shows in 2023 will be May 6-7 and Sept 22-24. USDAA has just changed some of their rules so jump heights and cut-offs will now be very similar to AKC. You can also choose to enter at a higher level if you so choose (for example, if you’ve never done USDAA but are already competing at high levels in other venues). USDAA courses are a lot like AKC courses but obstacles are a little more spread out. And it has fun games like Snooker and Gamblers as well as tournament classes. Hope to see you at our next show!
Scribe & Timer (and later our Pairs batons)- very patiently waiting for the class to start Walking Grand Prix
Jill Seward, show secretary extraordinaire
Winning costume

Ellie earned her C-ATCH at the Top Dog CPE Trial on November 12, 2022. She earned all of her Level 3 titles in December, 2019, but just as she was coming along nicely, COVID hit and she had to go an entire year without entering any trials. Once trials began again she finished up Level 4 titles, but her distrust of the teeter re-surfaced, so we stopped doing the teeter, went back to basics, got some specialized help, and started working to build her confidence again. By the time she got to Top Dog in November, she only needed 3 Qualifying Standard runs to earn her C-ATCH and she qualified in all 4 of her Standard runs that weekend. I’m so proud of Ellie and of how far we have come as a team. Here’s her C-ATCH photo with the honorable CPE Judge Judy Greco. Picture by Sarah Forde of Pixpup Photography.

Maggie tried her nose at a NACSW 1 Trial hosted by Northwest K9 Sniffers on 12/10/2022.
It was our first NACSW trial and we had a great time! She earned her NW 1 Title qualifying in Interior, Exterior, Vehicles and Containers.
I love my best girl and the fun we have together!

Alby and I had a great time this weekend at CPE. It was extra special because it was also his birthday weekend and he turned three. We got to play a little bit in level 5 and finish a few events in level 3. We only need one more colors and one more fullhouse to be done in level 3.

Darcy got her title in Novice Standard at Mt Vernon with Roberta Foster as her handler. Now both Darcy and Brody whom I love and looks exactly like DJ with all the same mannerisms as DJ, they are both going into Open Standard in AKC.

Ava and Fancy were the 2022 ASCA Finals Junior Agility Champion!!!

My huge brag is for my 13-year old boy, Steed.  At the SchaSam Toys-for-Tots fundraiser last weekend (where, by the way, we got $9500 in cash plus many new toys for Toys for Tots!!) Steed earned his NADAC Platinum NATCH.  This is the most difficult title in NADAC.  First you have to earn your elite titles in all 8 classes.  Then you have to earn a NATCH (20 Qs in Regular, and 10 each in Chances and Jumpers).  Then you have to earn a Versatility NATCH (10 Qs each in Tunnelers, Touch & Go, and Weavers).  Finally, you have to get 10 Qs each in Gamblers and Grounders (a total of 90 qualifying runs).  Steed picked up his final Grounders Q being his usual sassy loud self, yelling at me the entire time and then just sauntering across the finish line.  After the big ribbon, pole, and bottle of champagne came out, instead of wanting to run around, he went straight to say Hi to his friends in the ring.  Love this boy so much!

My other brag is for my 2.5 year-old crazy English Cocker, April.  At the Toys for Tots trial, she ran 17 runs over the 3 days, with 11 Qs!  She finished up her last Novice titles in Chances, Weavers, and Grounders.  She finished her Open title in Touch & Go, and earned her Elite title in Regular.  My baby girl is growing up!  She’s now in Elite in 4 classes and in Open in the other 4.  Of course, she still has her crazy moments, and did poop in the ring once on Sat and once on Sunday.  Ah well, someday I’ll be able to trust her in the ring.  I didn’t lose her to her nose once, which is a huge win.  Most importantly, she loves the game and runs with a big smile.

I got to attend my very first Cynosport this year! It was held in Scottsdale, AZ November 30th – December 4th. There were a total of about 450 dogs entered with about 20 teams from the PNW including 3 RAT members: Cheryl Parker with Samm (Cocker Spaniel), Micki Lagrou with Leelu (Border Collie) and Evelyn Robertson with Story (Border Collie).

The weather was awesome because, well, it’s Arizona. The footing was dry grass, but it wasn’t slippery. The first day was sunny and mid 70’s and we ran the quarterfinals for Grand Prix and Steeplechase. Each of us had at least 1 bye into the semi-finals for those classes because we placed in regional events so it was a short day. For Semifinals, Samm squeaked into Steeplechase finals with a dropped a bar, but she’s so fast that she made up the 5 points with time. Samm also made it to GP finals. Story made it to the Steeplechase finals too.

There was a Biathlon event with a standard and regular run in the main arena. The courses were tough but fun. Leelu placed 4th in the standard run.

There was also a Team event. There were about 70 2-dog teams and about 55 3-dog teams. Each individual team ran Snooker, Gamblers, Jumpers and Standard then scores were combined. The top 20 teams for each got to run in the final Relay. Cheryl & Samm were on a team with Stephen Champion & Saffie and Michelle Fritz & Bravo. Evelyn & Story were on a team with Rebecca Pauli & Maggie. Micki Lagrou & Leelu were on a team with Erin Urquhart & OCD and Krissy Rupe & MagiK. Both Cheryl and Mick’s teams made the finals.

Remember what I said about it being perfect weather? Well, apparently Arizona isn’t perfect. It started raining really hard on Saturday. We all ran Team Standard in the rain and then they postponed the Steeplechase finals until Sunday.

Sunday was fine weather and the footing held up pretty well. Team Relay finals were in the morning. Cheryl’s 3rd teammate decided it was too slick to run so Cheryl and Stephen ran a very creative relay which simply skipped the 2nd leg and they still took 16th overall. Micki and Leelu had an off course in Relay finals and the team finished 15th overall.

Steeplechase finals was super exciting for Cheryl as they ran first in their 12P jump height and then WON!! We were all crossing fingers – it was great. And then Evelyn & Story took 5th place overall in their 16P height!

Watching Steeplechase in the main ring

Below: Most of the PNW teams and Jan & Dale judges

Happy New Year 2023 Everyone!!! May your days be filled with joy, peace, happiness for yourselves, friends, family and furry animals. 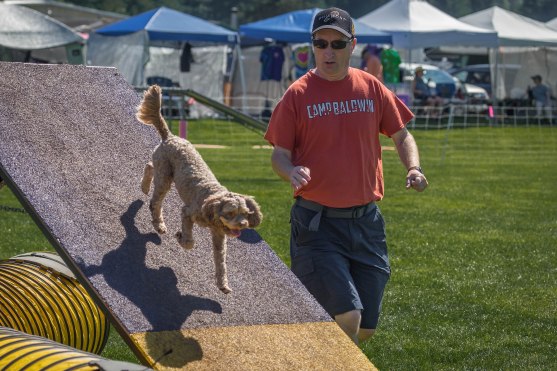 In this Issue: Fun Stuff And Spotlight on RAT members Have brags?  pictures,? announcements for the next Rat Tales the Blog?  Email […] 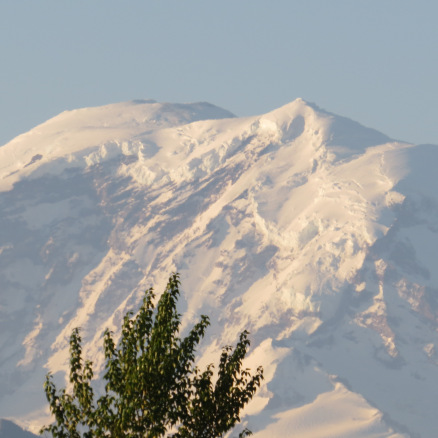 This Month in RAT Tales in Spotlight on Members we talk to Debbie and Mike Mason and new member Linda Hall. We […] 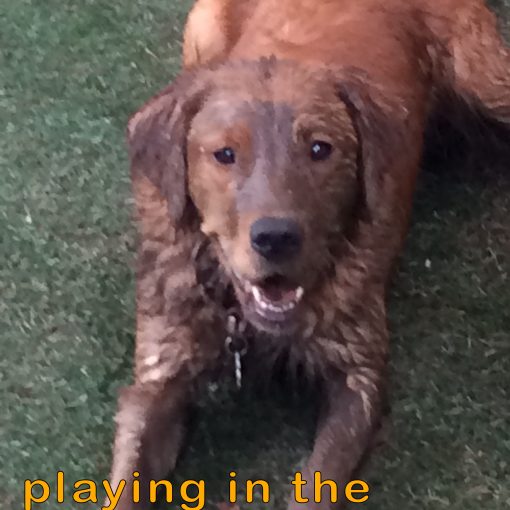